Tic Toc…Tic Toc… An illegal CCTV system in a stroke! 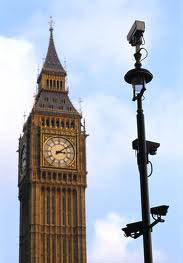 Yes I do realise that this is raised twice a year.

And you know why? Yip – it’s because we all still seem to be ignoring the legal requirements placed on anyone operating a CCTV system that captures members of the public.

So yes we did all remember to change the clocks in our houses – the mantelpiece clock, the cooker, the boiler timer, the bedside clock radio, wrist watches etc.

And then when we got in to work we went around changing the clocks on the walls?

And whose responsibility is it to change the clocks?

Well certainly in my house it’s always Dad. Not sure why in this day of equality. Probably because I have always done it and it’s in my nature that I need to know that it is done so would do it myself.

And what about at work? Whose responsibility is it? The manager? The secretary?The person who works in that specific area? What about the receptionist or the security guard who keeps an eye on the door? Or the maintenance person or the facilities manager? I would hazard a guess that no-one knows. I would suggest that no-one really cares because eventually someone, somewhere, will ….sorry for the pun here….’clock onto’ the fact that the time is wrong and will decide to take some kind of action to rectify it. Now that situation is not ideal but I would guess that this is exactly what has happened or indeed is still happening the week after British Summer Time has officially ended (although the BBQ is by now a very dim and distant memory so to my mind it finished a good wee while ago!)
So in a lot of cases we get away with this lackadaisical approach to the timepieces that could be described as not very important in the wider sense.

So what about more important timepieces? Like those on IT systems that need accurate times? Say also transport systems for buses and trains and planes? Time is pretty important there. Radio and TV where we check the time? Many, many areas where the time is actually extremely important. Do we think they take the same softly softly approach to changing their clocks? In making sure that the time is accurate? Would we have managed to get into work this week on time if these people hadn’t bothered to change their clocks? Would you have got your children to school in time? Or your elderly parents to their lunch clubs?

So it would seem that these types of outfits take the case of time-change a lot more seriously than your basic clocks ‘around the office’. Perhaps they even anticipate in advance what the impact might be should their clocks not be changed correctly. And that is correct because the effect of not changing their clocks could have a major impact. It could affect many people from different walks of life. So that seems to be a very correct approach. So for these more important timepieces, we see that those responsible for them do take it seriously and make it part of their responsibilities. They do it from a business point of view. They take it very seriously. Allocating resource responsibility. Checking to make sure it is done. And accurate. And timeous. No point in changing the clock 12 hours later for the trains is there?

Now suppose that it is not just important to do from a business point of view. That it keeps everything going. Now on top of the fact that all these things are correct and that many people are reliant on the accuracy of the time, let us now introduce the fact that in some cases making sure that time is correct is a LEGAL requirement.

So this now takes it to an even higher level. In that case then we would have all the positive responses as above where we ensure that such an important action is anticipated, planned and checked that it is done correctly. This is serious stuff, legal requirement.

And that is the position that the great majority of CCTV systems in the UK find themselves in. How many companies that have CCTV spent time prior to the clock change actually identifying what was required and when it was required? How many companies actually allocated a specific resource to be responsible for ensuring that the CCTV clock would always be correct and therefore that the CCTV system would continue to be fit for purpose? And would – at least in respect of the time – remain legal with regard to complying with data protection legislation?

And indeed many more questions could be asked. And don’t forget, while you read this you have already and continue to rely on that CCTV system as perhaps a staff member or a member of the public.

So the point that I am making? Well to be honest not many companies and organisations and businesses out there change their clocks because they have a legal obligation to do it. They do it and many of them do it very quickly and very efficiently because it is very important to their business.

But with CCTV there is a legal obligation. Probably one of the few areas where the changing of the clock has a legal impact. So you would think that the people who have to change the CCTV clocks would know all about it. Would have it top of the priority list twice a year. That they would make all the checks needed to ensure that it is done correctly and accurately. And legally.

Horrifically the exact opposite is the case. The CCTV clock is one of the last things people think of. The people responsible for the CCTV system do not understand the importance of the accuracy of the clock. And that they have a legal obligation.
And so they do not look at any areas of impact that the wrong time might have on their CCTV system.

Can you imagine the damage to the reputation to CCTV if CCTV evidence is thrown out of court because the CCTV operator could not even get the time right on the system. That the CCTV system showed an hour out when the crime was committed and the accused could prove that they were elsewhere?

Can you imagine that same scenario and the thoughts of the victim? The victim who was relying on the CCTV evidence? A sophisticated system that showed the incident. In full colour. Clear as a bell. Even had the date and time. What could possibly stop the accused being found guilty? And just because someone did not take the time seriously enough.

So of all the CCTV systems in all the land how many do we think took their legal responsibility correctly and seriously and ensured that they changed the clock on the CCTV system accurately and timeously? All the pubs and clubs. The corner shops. The chip shops and taxis. The bus stations and airports and trains. The city centres and the housing concierge. The schools and the offices.

This affects all the CCTV systems. All over the UK. Big and small, Public and private. Fancy and basic.

And you know what. The public expect that CCTV system to be running. To be working. To be protecting them. To be accurate. To keep them safe. To bring baddies to justice. To do what it should do. No more…no less.

And let’s be honest, did YOU ever think that changing a clock could have such an impact? Be LEGAL. Be compliant with data protection for your CCTV systems.

And the clock is just a tiny part of what is really common sense requirement to be compliant with data protection. Any doubts then contact CameraWatch. Independent. Not-for-profit.

Oh and now that you’ve finished reading this, on your way to heading for the bacon butty and cup of tea – have a wee check on the time on the CCTV system. It could make a huge difference.